In my last post, I described Oliver Lang’s unique modifications to HMS Terror’s stern to accommodate the screw propeller. A primary component of this modification was a massive 3.5 inch thick “iron staple knee”, which securely bound the keel, original sternpost, and rudderpost together.

To model this part, I will use brass, blackened to simulate iron. I originally attempted to bend and hammer a 1.85 mm thick piece of brass into the correct shape, but try as I might, I could not create the appropriate angles accurately and only produced a mangled mess. Finally, I resigned myself to the fact that I would need to cut three separate pieces and then silver solder them together. I had never attempted this before, but I found a great deal of information on Model Ship World, and decided to give it a try. 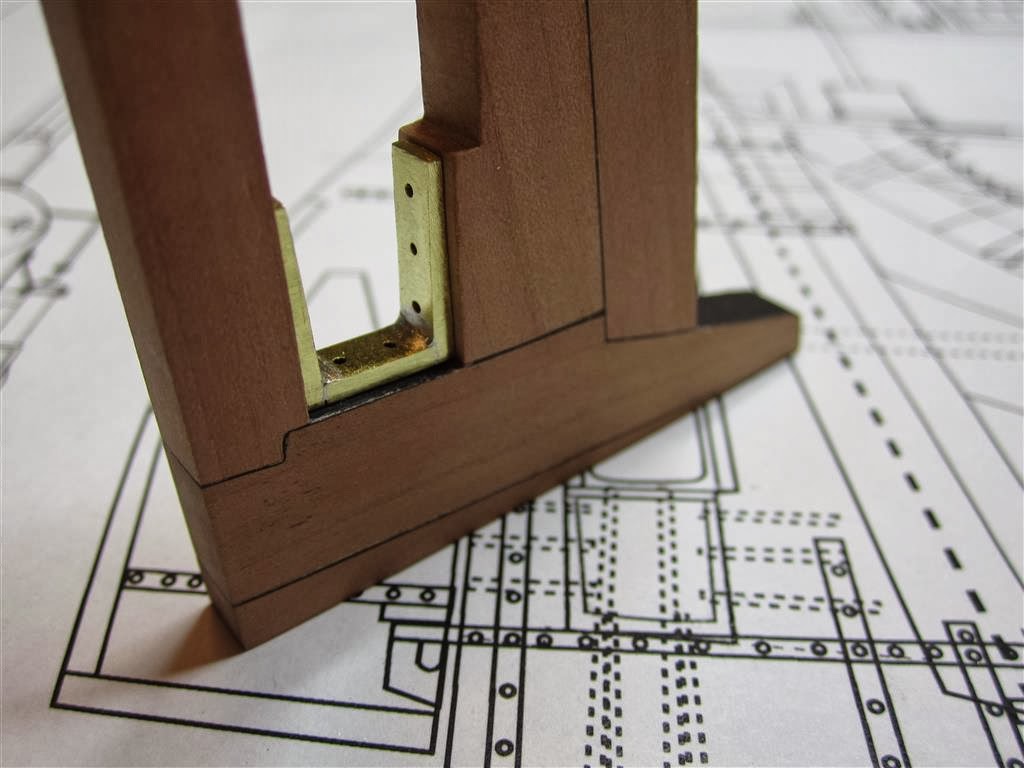 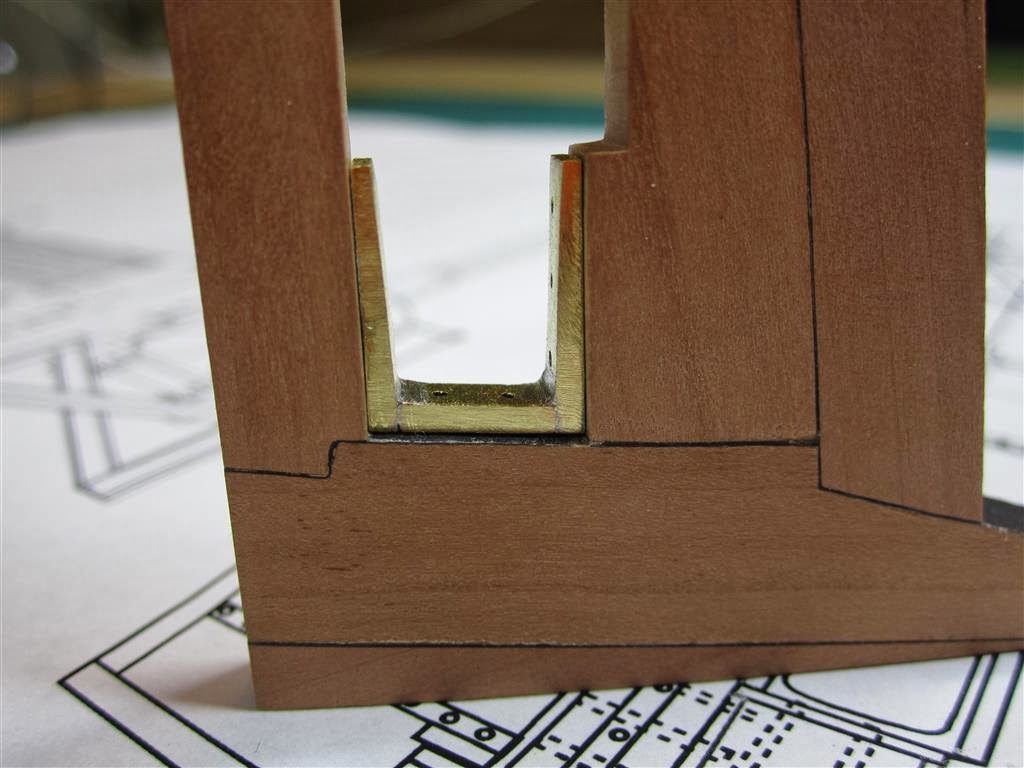 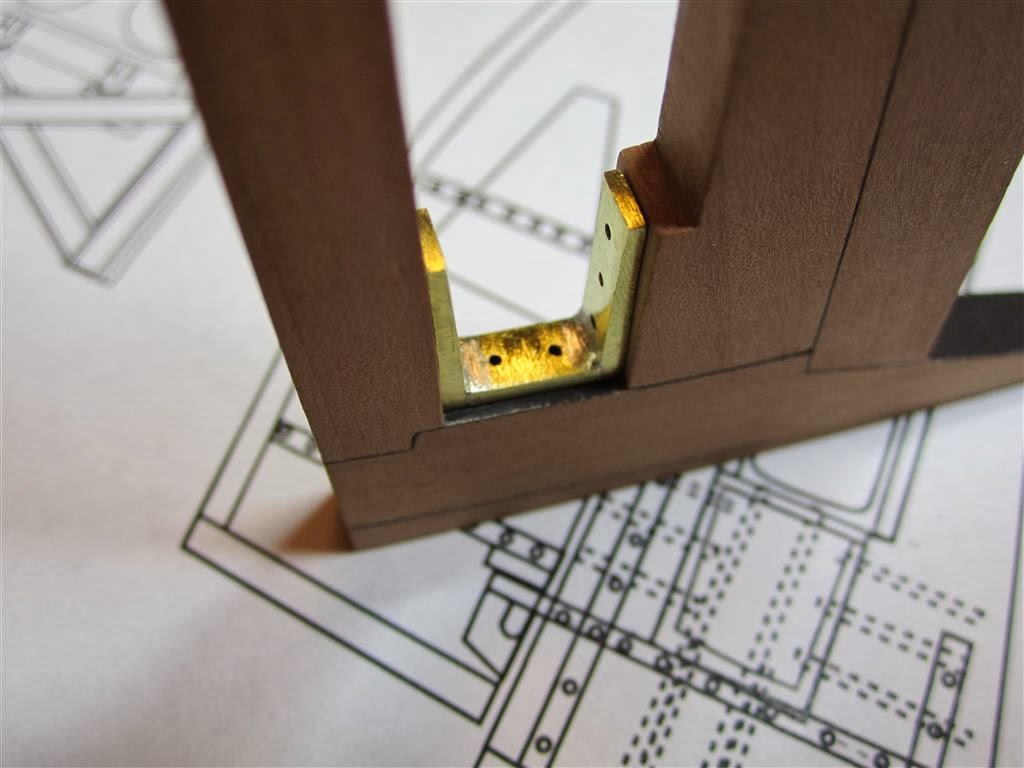 Posted by Ship Modeler (Matthew Betts) at 18:44 No comments:

Oliver Lang's 1845 stern plans currently held in the National Maritime Museum's
collections. The title indicates that the plans are of HMS Erebus, but the dimensions
of the plan, especially the height of the bulwarks, match HMS Terror plans
more precisely. Additionally, the transcribed version of these plans occur on the
1836/37 profile plans for HMS Terror, and match the 1812 plans for Terror
relatively accurately.

In February 1845, Oliver Lang, Master Shipwright at Woolwich, faced a daunting challenge. The Admiralty, under pressure from Parry, had decided to outfit HMS Erebus and Terror for auxiliary screw propulsion, powered by small passenger locomotives.

Screw propulsion was in its infancy and contemporary designs, based on patents filed by Francis Pettit Smith and others, called for the placement of the propeller opening in the deadwood of a steam powered vessel (Bourne 1855:28). However, applying such a modification to polar vessels would critically weaken the stern, and Lang knew from the Terror’s first arctic expedition that even the most robust sternpost was severely vulnerable when overwintering in sea ice. How could he protect the ship’s stern from the pack when a gaping hole had to be cut in the deadwood for the propeller?

His solution appears in a plan dated March 17th, 1845, which was subsequently transcribed onto the 1836/37 profile plan for HMS Terror. Instead of altering the ship’s existing stern, Lang simply extended the stern of the ship aft by adding a new keel section, onto which a new rudderpost and aperture for the propeller were attached. The 1836/37 plans seem to show that Terror’s original sternpost had been modified for Back’s voyage,  but the 1845 annotations clearly indicate that Lang reconstructed it to the same configuration used in Terror’s original design (alternately, it is possible that Terror’s stern was not modified in 1836 as planned).

Lang’s 1845 design called for a triangular piece of wood to be bolted to the original sternpost, creating a vertical face for the propeller aperture. The new rudderpost and the angled fitting were both tenoned into the keel extension, as indicated by the presence of horizontal bolts on a contemporarymodel of the design. The entire structure was then bolted to a massive u-shaped “staple knee”, made from 3.5 inch thick iron, which was the same length as the propeller opening.

Lang next turned to the problem of protecting the new rudderpost and propeller aperture from ice damage. He settled on a well system which could be used to ship and unship the propeller, similar to a design patented by Joseph Taylor in 1838 (Bourne 1855:32). However, Lang’s system included a new innovation; when the propeller was unshipped, the well would be filled with a series of stacking wooden and steel chocks. The chocks were shaped to match the dimensions of the new rudderpost and deadwood and would completely fill the well, thus reinforcing the rudderpost against forces exerted by the ice.

Taylor’s patent described that the propeller could be shipped via “vertical grooves cut in the true and false stern posts … in which frame the propeller is placed” (Bourne 1855:32). However, the use of reinforcing chocks required that this system be modified. Lang replaced the grooves in the stern and false stern with robust gunmetal rails which themselves had a vertical slot running much of their length. The protruding rails were necessary to secure the chocks in the propeller well and needed to be very strong to endure the pressures of pack ice (I’ll present more on the configuration of this rail system and the propeller in a subsequent post).

While we may never know how Lang’s chock system faired after two years in the grinding pack off King William Island, we can surmise that it must have worked relatively well because the Terror survived its first winter at Beechey Island in sailing condition. Further, we know that the same chock system was installed on the Intrepid and Pioneer (Anonymous 1850:8), steam tenders used in the Franklin search effort, and that both ships survived multiple winters in sea ice before being abandoned in relatively seaworthy condition.

Scantlings for Terror’s Sternpost and Rudderpost
Sternpost
Sided:
At Head = 13 and ½ inches
At Heel = 10 and ¾ inches
Moulded depth = 17 and ½ inches

Nowhere is the strength of HMS Terror’s frame more evident than in her bow architecture. Already stoutly built as a bomb vessel, Terror’s 1836/1837 plans indicate that the bow was significantly altered for conversion to polar service. The 1836 deck plans show that her stem was sided 12 and ½ inches, the same as her keel, but it was much thicker/deeper than normal. In fact, its moulded depth was greater than a vessel three times her tonnage (see scantlings below). This robustness was also transferred to her apron, which was consistent in size with that used on a 36 gun frigate.


Terror’s external bow timbers were also modified in 1836; all ornamentation pieces were removed, as were the cheeks, forefoot, bobstay piece, gammoning, and lacing. In their place, a very robust and simplified architecture was installed which consisted of a gripe, stem piece, main piece, and a short chock to support the bowsprit. Again, these pieces were very robustly built, and were sided the same as the keel, diminishing to only 10 inches at the fore edge.


Aft of these bow timbers, the stemson was similarly solid, sided the same as the stem and just as thick. However, in 1836, the stemson itself was reinforced by massive oak chocks the same width as the stem, but this time up to 16 inches thick. At the position of the third waterline, this effectively created a single massive block of wood, 12 and ½ inches wide and extending from the stem piece more than eight feet aft.  Indeed, it was strengthening like this that permitted Crozier to use the Terror as an icebreaker during the Antarctic voyage of 1839 (Ross 1847:147).


Scantlings for Terror’s Stem and Apron:


Bolt diameters = 1 and 1/8 inches (consistent with 36 and 74 gun vessels, standard for bomb vessels)

Scantlings for Terror’s Knee of the Head:


Ross, Sir James Clark
1847    A Voyage of Discovery and Research in the Southern and Antarctic Regions, During the Years 1839-1843: Volume I. John Murray, London.

Posted by Ship Modeler (Matthew Betts) at 16:44 No comments: