As discussed in the previous post, here are the updated (hopefully complete?) plans for HMS Terror. Note that the Upper Deck Plan has been modified to include the accurate width of the propeller well, based on information gleaned from the engineer’s model. Also, I noticed that the stern model includes a narrow lip surrounding three sides of the propeller well (I assume for the scuttle to rest on), so that lip has also been included in my new upper deck plans. 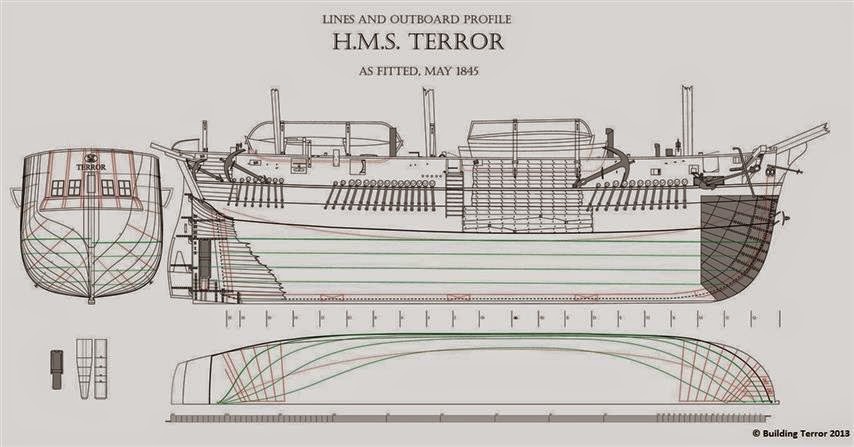 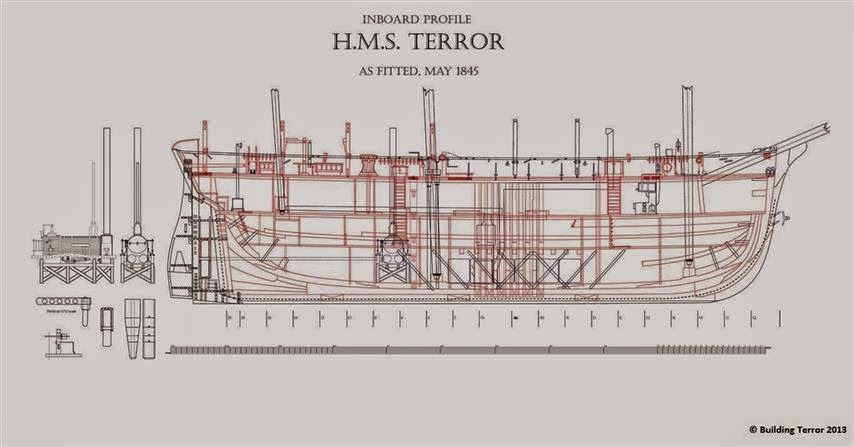 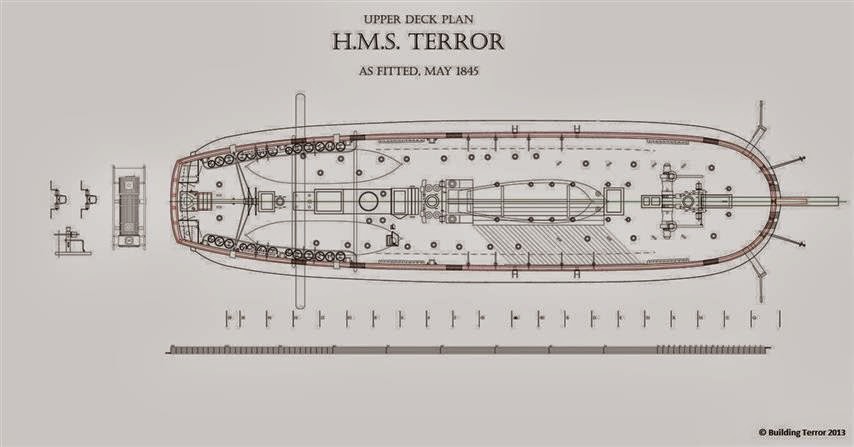 Over the past couple of weeks I’ve been designing construction plans for my model (I hope to begin cutting wood next week). As I worked on individual stern components, I began to notice possible errors in my plans. Specifically, the original 1845 stern sheet (and the annotations on the 1836 sheet), on which my plans are based, only exist in profile and therefore don’t show all the necessary cross-sectional modifications to the stern that were required. The problem lies exclusively in the well that was constructed to ship and unship the auxiliary screw propeller. If the rudder post (also known as the “false sternpost” or “after sternpost”) was the same width as the sternpost depicted in Terror’s original 1813 plans, there simply would not be enough space for the propeller well positioned directly in front of it. I strongly suspected that the rudder post was thicker than I originally drafted in the body plan (and thicker than the keel), but there were no historical plans that confirmed this. Fortunately, an engineering model of the modified stern was produced for the Erebus and Terror ca. 1845.


As can be seen from the model, the upper part of the rudder post was indeed widened, apparently by adding two large bolsters on either side; it then tapered abruptly at the opening for the propeller (likely to prevent drag). The added width on the upper part of the rudder post provided the necessary space for the propeller well and I’ve now changed my body plan to reflect this. However, in scrutinizing the stern plans and annotations to solve the width problem, I also noticed some faint modifications that I missed in my initial tracing of the plans.

First, the opening for the propeller well apparently included two separate iron fittings which were bolted to the rudder post and the sternpost, respectively. Each fitting appears to have had a groove which accepted a smaller rectangular metal frame which held the propeller (e.g. Battersby and Carney 2011: 204; 208). Guided by the metal grooves, the propeller frame could be raised or lowered into position using standard ship’s tackle. A contemporary example of exactly this sort of removable propeller system is preserved in a model at the National Maritime Museum in Greenwich (see here and here for similar designs).

Second, it appears that a unique u-shaped iron fitting, the same length as the propeller well, was used to secure the sternpost, keel, and rudder post to each other. Two or three large bolts secured a separate timber to each of the three faces of the fitting, effectively creating one solid structure. I suspect that this was a midline fitting which was protected and covered by a large fitted wooden chock, which itself was bolted to the surrounding wood, probably with as many as four bolts. Why this unique fitting was necessary has not been described in the historic literature, but is seems certain it was used to increase the strength of the sternpost near the keel (recall that Back’s voyage proved how vulnerable an unmodified stern could be to pack ice). How the ship’s stern timbers were attached to this structure is also not described, but it seems logical that the rudder post and sternpost would have been bolted to the two central stern timbers, with which the widened sternpost would have been contiguous. Contemporary models show that a sturdy rectangular frame enclosed similar contemporary propeller wells, and the sternpost and rudder post were also bolted to this frame.