HMS Terror’s paint scheme is considered to be well known. Richard Cyriax, who produced the most authoritative work on Franklin’s last expedition, states: “Both ships were flush-decked, and had black hulls, white masts, and yellow weather works...” (Cyriax 1997:39).  This passage has long been interpreted by subsequent researchers to mean that the ships had a yellow stripe along their outside hull (e.g. Parks Canada, Canadian Geographic, and published work too numerous to list here).  Cyriax based this description not on a primary source, but on a popular work by his friend, Rupert T. Gould (1928:112); unfortunately Gould appears to have misinterpreted the primary source material.


Gould’s information came from a remarkable parliamentary record, which documents an Admiralty investigation into two ships spotted trapped in an iceberg off the coast of Newfoundland in 1851 (Inglis 1852). The investigation focused on comparing the eyewitness testimony about the iceberg ships to the firsthand knowledge of the shipwrights who worked on Erebus and Terror. While the Admiralty determined that the iceberg ships could not be Franklin’s vessels (the size difference between the ships was too large and they were not barque-rigged ), the report contains critical primary information on the paint scheme of the Erebus and Terror from Oliver Lang, the master shipwright responsible for the 1845 refit of the vessels.


The correspondence between Lang and the Admiralty is worth quoting here in its entirety (Inglis 1852:18):

Admiralty, 17 April 1852.
Sir,
I am commanded by my Lords Commissioners of the Admiralty to desire
you to call upon the officers of the yard under your superintendence to
report how Sir John Franklin's ships, the " Erebus" and " Terror," were
painted when they sailed.


Sir,
With reference to their Lordships' letter of this day's date, we beg to
acquaint you, that Sir John Franklin's ships, the " Erebus " and " Terror,"
were painted when they sailed, black on the outside, and weather works
inside yellow.

Further information about the colour of the masts was also requested from Lang and appears below (Inglis 1852:35).


Commodore Superintendent at Woolwich,
Referring to your communication of the 17th April last, upon the subject
of painting the " Erebus" and "'Terror," my Lords desire that you will state
for their information how their lower masts were painted.


By command of their Lordships.
(signed) W. A. B. Hamilton.


Sir,
Agreeably to your minute on Captain Hamilton's letter of yesterday,
we have to acquaint you that the lower masts of the "Erebus" and "Terror"
were painted white when they left this port.


Lang’s choice of words in the first correspondence appears to be the source of the enduring discrepancy regarding the ships’ paint schemes. It seems Gould, followed by Cyriax, and then myriad others, interpreted the phrase “weather works inside yellow” to mean a band of yellow on the outside hull of the vessel. Indeed, the “weather works”, or upper works of a ship, are those areas of the vessel above the waterline exposed to the weather, including the upper hull and bulwarks both inside towards the deck and outside on the hull. However, Lang specifically states that the “weather works inside “ were yellow, meaning that the inside bulwarks were painted yellow. He makes no mention of a stripe on the outside hull, although a solid paint scheme without a stripe would have been unusual for a Royal Navy vessel of the era.


Thankfully, a watercolour painting by Owen Stanley, who accompanied the ships across the North Atlantic to Greenland in 1845, provides important primary evidence which dispels much ambiguity (see below). The painting shows conclusively that the Terror and Erebus had black hulls with a white stripe along the outside weather works. The painting indicates that the white stripe was contiguous with the chock channel and that it ascended the outside stern frame of the Erebus at an angle. Another watercolour, which may also be the work of Stanley (it is clearly based on his 1845 drawing), confirms these characteristics, and also shows the yellow painting on the inside bulwarks (note also the very rusted condition of the iron bow plating). This image also suggests that the white stripe extended forward around the knee of the ship.

The presence of a single stripe along the hull, which extended around the knee of the ship and up the exterior stern frames, appears to be confirmed in other contemporary sketches by Stanley, Gore (also here), and Fitzjames, as well as by the Illustrated London News (which also confirms the white stripe on the outside stern frame, see below).

A white stripe painted on the exterior weather works is entirely consistent with Royal Navy standards of the mid-19th century. Yellow and black striping, or the “Nelson Checker”, was common in the Royal Navy vessels up to about 1815. However, after ca. 1815, Royal Navy vessels began to adopt the black on white pattern first established by the American Navy around the turn of the 19th century. In fact, black hulls with white stripes remained the standard paint scheme of Royal Navy vessels well into the steam era (see Konstam 2010 for good summary).  It therefore seems obvious, given all of the available data, that Erebus and Terror were painted with the standard white on black scheme of the era, which may explain why Lang didn’t deem it necessary to mention this standard attribute to the Admiralty.


Most Royal Navy ships placed the white stripe over the gun ports above the waterline; when opened, the ports/lids created the “checker board” pattern. However, all contemporary images of the Franklin ships show that the white band corresponded with the solid chock channels grafted on to the ships. It is important to note that this paint scheme is different than that utilized during the 1839 Ross voyage, where the ships appear to have had two bands of white on the outside weather works. A watercolor of HMS Terror by Davis shows that one of the white stripes was contiguous with the chock channels, as in the 1845 expedition, while the other white stripe was a little lower, perhaps contiguous with the band of copper sheathing that extended below the chock channels for most of the ships' length at this time.


The colour of the top, horizontal, surface of the channel is less certain, as the Stanley watercolours provide little detail in these areas. One of Stanley’s sketches (see here) seems to indicate that the tops of the channels were black, while another suggests they were potentially white (see here). However, the famous image from the Illustrated London News clearly shows that that the top of the channels were painted white (see image above). An image of the Terror beached on the Irish Coast in 1837 by Owen Stanley (see below) also shows that the tops of the channels may have been painted white (or at least a lighter colour), though how consistently the ships were painted on subsequent voyages is unknown. Since the paint scheme is ambiguous, I intend to try both versions on the model and choose whichever seems to fit better with the overall colour scheme of the ship.

Similarly, contradictory information exists about the paint scheme on the rudder and transom of the ships. The 1845 watercolour by Owen Stanley seems to show that the transom and rudder were painted black, although the lighting effects on the painting suggest that those areas of the ships may simply be in shadow. Other contemporary sketches by Stanley and  Graham Gore (also here) suggest that a lighter colour was painted on the stern window frames and on the entire transom of the ship, while the rudder remained black (perhaps with white trim?).  The Illustrated London News image is slightly different (see above), showing a thinner arch of white surrounding the windows of the ship and a darkly painted rudder.


Colour paintings of the Erebus and Terror produced for the Antarctic expedition by Davis (see also here) show that the entire transom was painted white and the rudder was black, again perhaps with white trim (although lighting might play a factor here as well). Interestingly, the Davis paintings also show detail of an arch-shaped feature surrounding the windows.  Similarly, a sketch of the Terror from 1837, by Owen Stanley, indicates that the transom was painted completely white (Back 1838:400).  A water colour of the Terror on the same voyage by William Smyth also shows an all white transom, this time with a white rudder.


On balance, the available sketches and paintings suggest that the transom was painted completely white, and that the window frames were as well. The rudder is more ambiguous, but again, the weight of evidence seems to indicate that it was painted black, perhaps with white trim (the Terror did have several separate trim pieces grafted to the aft margin of the rudder).


I assume the black hull paint extended to the keel, as we know that HMS Terror and Erebus were not coppered below the waterline, as noted in The Times on 26th April, 1845:

“The decks of the Erebus and Terror are constructed on the diagonal principle,
and about twenty feet on each side of the bows has been cased with strong sheet
iron. There is not any copper sheathing on either of the vessels, as no danger is
to be apprehended from the attacks of shellfish or barnacles, the ice soon clearing
them from encumbrances of that description.”


This is in contrast with the Illustrated London News image of the ships which appears to show a copper plated hull, which must be an error.


One of the things I enjoy about ship modeling is that it is woodworking – often with very fine hardwoods. Like many ship modelers, I don’t want to cover beautiful wood with paint; instead, I intend to present the Terror’s historic paint scheme using minimally treated natural or dyed/stained wood finishes. My plan is to use dyed or stained Swiss pear for the keel, stem and stern timbers, and hull planking; holly for the transom, chock, and deck planking; and yellowheart for the inside bulwarks. I’ve order the material from Hobby Mill, all planed to exact scale thicknesses, which I will discuss in future posts.  My wood arrives in early December; until then, I will keep cutting stations! 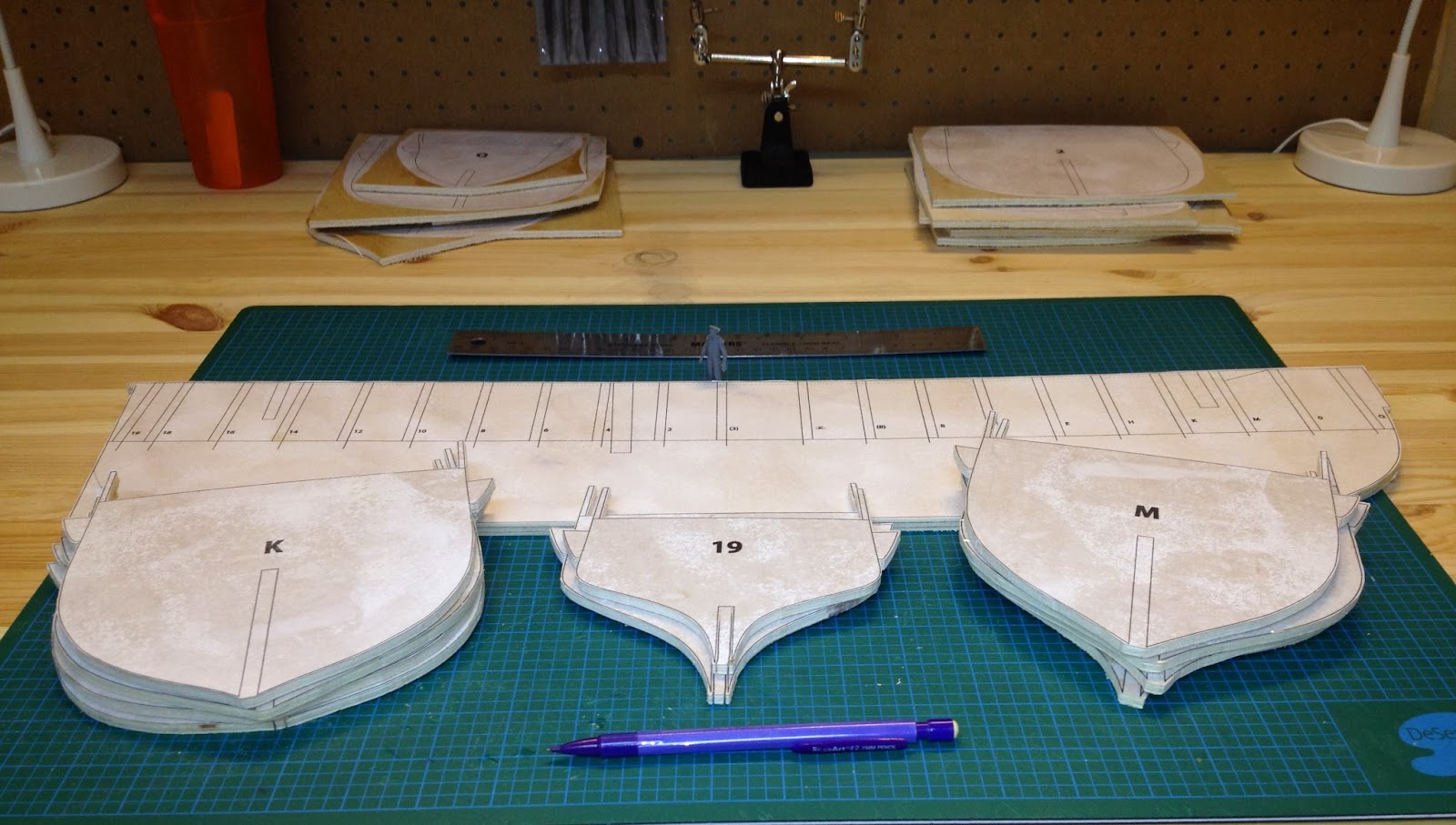 Over the past several weeks, another woodworking project has kept me away from HMS Terror. However, I’ve made a little progress on preparing the bulkheads for assembly. These are made simply enough; the station plans are glued directly to the plywood board using spray adhesive and then cut out using a scroll saw with a fine blade.


You can see from the picture that I’ve intentionally left a rough 1-2mm gap surrounding the plan outlines. It is impossible to cut the bulkheads accurately with the scroll saw, so they will be carefully reduced to the precise dimensions using a spindle sander and file. The midline slots will be cut with a coping saw, again to ensure accuracy.


If you look closely, you can see the shrewd eye of Crozier overlooking the outfitting of his ship (he’s 1:48 scale as well).
Posted by Ship Modeler (Matthew Betts) at 15:57 1 comment: